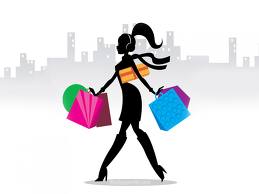 When I first started going out dressed as a girl, I avoided paying for anything.  I really just did not want to interact that much with the public.  I thought they would ridicule me.  Which I have since discovered to be just plain wrong.

The easiest way to make purchases while dressed as someone other than your ID, is to not have to use your ID and to pay cash.  Ah, good old cash.  Trust me, merchants want your money regardless of how you are dressed.  I have never had anyone refuse to take my cash.  It would be quite stupid of anyone to refuse to take my cash simply because of how I am dressed.  And no one ever has.  Not too surprising.  If you have any reservations about it, go with cash.  Cash rules the world.

Now a little more tricky, sometimes, is trying to use your credit/debit cards.  In using those options most merchants will check your ID.  I picked up a tip from some other place about this process.  The tip was, to hand them you ID, and say something witty like, "Yes I know, my hair is a little shorter in that photo."  I used that all of the time.  People would smile, and say "Yeah, it's okay."  And then they would run my card and give me my purchases.

It occurred to me at some point though that I no longer wanted to have to say that to people.  I think this was about the time that I realized I wasn't fooling anyone.  Everyone knows that I am a man dressed as a woman, and the thing that I began to see is, they know and they don't care.  Which nicely does away with worries about passing.  With this knowledge I just began handing people my ID and letting them do whatever they wanted to.

For the past five to ten years, people mostly just took my stuff and ran the card through the machine, without much of anything.  Occasionally they will hold up the ID and compare my ID picture to me.  They generally see the resemblance, as well as my big smile, and then they run the card.

Twice though, some other things have occurred.  Once was at Costco.  The lady ran my purchases, I handed her my ID, and she said "so... who do these cards belong to?"  I told her that it was me and smiled.  She hesitated for a little bit, and I repeated that it was mine and smiled bigger.  She studied the cards for awhile and then it clicked.  She ran my cards through the machine and then suggested that I go over to guest services and get a new ID with a new picture on it to match my new gender.  I thought it was polite of her, and testament to my increasing ability.  I did not go get a new ID though as I don't always go to Costco dressed as a girl.  I wish they would let me have two cards, come to think of it, I should go ask them about that. Hmmm...

My largest issue with purchasing items came yesterday at Walmart.  Maybe it is my new wig, though I doubt that.  I handed the cashier my ID and she said "You can't use this card because this is not you."  I smiled and said, yeah it is.  She looked at me, back at the card, back at me,, back at the card, and said "nope, you can't use this as this is not you."  I smiled again, and said, "Yeah, trust me, that is me."  She said that she had to call a manager.  The manager came over and said, "You can't use this card, as this is not you."  I smiled bigger and said "Yeah that is me."  I then said my little line about my hair being shorter in that picture.  She said nope.  I said yeah, and again smiled.  (Niceness will get you everywhere people.)  She studied the card for awhile and me for even longer.  I smiled.  She said "okay," and allowed me to make the purchase.  I thanked her for being understanding.

That experience was truly an anomaly.  I just returned recently from a five day trip all around California, all by myself, dressed as a girl the entire time.  I went shopping at numerous locations and paid with my credit card the entire time.  I stayed at hotels and gave them my male ID.  I made lots and lots of very expensive purchases throughout the whole time and never once was ever questioned.  Even though I did have my new wig on.  Nobody questioned it at all.  This one, $12 purchase at Walmart though stumped the poor cashier.  I stood my ground though and was polite and eventually they relented.

So... my bottom line advice to you is: don't be afraid, merchants want your money.  They are in the business of selling things and taking your money.  If there ever is a question, just be polite, smile big, and stand your ground.  I have never walked out of a store without what I wanted to buy.  Some occasional questioning I can deal with because I do not take it as a personal attack on me.

If you have not done it yet, go for it.

Oh on a slightly related note, while dressed as a girl once, I happened to unfortunately had to hand my ID to a police officer.  I was sure there would be problems.  Nope, not a single one.  He accepted it and said nothing to me.  Actually police are terrified of us accusing them of discrimination and suing them.  This guy was totally cool about it, though I was flipping out inside, I tried to appear cool and collected.  The cop had no issues with it at all.

Love ya, hope my experiences help to make you feel more relaxed about it all.

Email ThisBlogThis!Share to TwitterShare to FacebookShare to Pinterest
Labels: Out and About, shopping